In the state of Iowa we have an annual bike ride that goes across the state called Ragbrai. I have always known about this ride but had never experienced what Ragbrai really was. This year my town was designated as an overnight stop. For months the town prepared to take on 20,000+ riders and their support crews. So essentially overnight our town would double in size! Committees were formed and the city went to work for months to make our community look its best. Volunteers were needed for many tasks to make this event happen. Now I will admit I was not one who jumped up and offered so serve on any of these committees cause I had no idea what to expect from all this.

As the event came near road closures and bike routes were announced and the dread set in…. Every way I could get into town was going to be majorly effected by all the riders coming to town. So negativity in my head began. Now I’m one who doesn’t like to let the negative take me down so instead of becoming the negative nelly I decided to finally offer to volunteer to do something to help out.  There had been a volunteer sign up in my gym to help at the beer garden so I finally put my name down.

A few days later a friend randomly asked if I have ever thought about riding a day of Ragbrai? She and another friend were going to ride one day and were looking for others to join them. My response was No I had never given that a thought!?!  I had not rode a bike in years, in fact the last time I was on a bike it was a stationary bike that I was riding for re-hab after my hip surgery!? I don’t even own a bike! She said no problem they had a bike and a helmet I could borrow. Well that just left one more hurdle. Making sure that someone could watch my 4 kids so momma could go on an ADVENTURE!! Once I had that covered I was ALL IN!

I became a bit nervous as the fact that I had just said yes to ride 72.9 miles with no training or preparation set in. So I went Facebook and asked for tips and must knows on riding distance. After many responses it became very clear that padded cycling shorts were a must!!!! So onto Amazon I went and prime shipped myself some shorts and a fanny pack (to carry my necessities).

Ragbrai day came and the detours began. Instead of being an inconvenience it became an ADVENTURE. My kids LOVED watching all the cyclists as we carefully and slowly drove with them down a short unavoidable section of road. The town looked great with all of the decorations and welcome signs on business windows. The yards began to grow with tents and makeshift Ragbrai cities. It was so fun to see how all of this traveling city comes together. I was finally able to pick up the bike I would ride the next day and tried on my cycling shorts and rode the bike around my neighborhood for a test run. My anticipation began to grow!

That evening I checked ID’s for the beer garden and began to realize just how far people come to be a part of this event. As I chatted with them about why they come I began to take more pride in my state and community. People travel from Massachusetts, Florida, California, Colorado and so many other places to experience what I get to live every day, Good Old Iowa. The hospitality, warm friendly people, communities that come together for a common cause…..My evening flew by as I chatted with those passing through but I called it a night early to rest up for my big day!

Ragbrai Riding day arrived. I loaded my bike up and drove through the Ragbrai cities already packing up at 6:30 am!? Just as quickly as they had all arrived they were leaving. I met up with my girlfriends and we did the final check on the things we were told we needed: water, cash, debit card, sunscreen and any other snacks that could fit in our fanny packs ( Yes I totally brought back and rocked the fanny pack!) We were off on our big adventure! I quickly learned there were certain etiquettes to riding in large groups. Certain things should be said when maneuvering through riders, when cars are approaching, when rumble strips are coming up and so on.

After I settled in, I began to look around and take in what I was a part of. There were 20,000+ people of all ages, shapes and backgrounds riding the rural roads of Iowa together. Small towns had rallied volunteers to greet us, cheer us on, feed us and entertain us. For some of these small towns I’m sure this was quite the task to recruit the man power it takes to do all of this.  All of this for complete strangers they may never cross paths with again!  The Farms along the way also stepped up and offered homemade baked goods, water, and a place to rest in the shade. It was amazing to see so many people out supporting one another in a common goal.

The day was really pretty simple and uneventful. We rode, we talked, we laughed, we ate, we took in the fresh air, we took breaks. But through all this I learned some things about myself and life….

1) There is great reward in taking care of yourself and staying fit. Never would have guessed my daily workouts would have lead to this but I am so incredibly grateful for my health and the ability to just jump on a bike and ride 72.9 miles!

2) It is a good thing to take time for me. I could have used my kids as an excuse not to do this but instead I made the time for myself and my spirit was filled because of it.

3) There is good in the world. People still reach out and are kind to strangers,  You can rely on others to encourage you through, it is amazing what happens when we come together for a greater cause.

4) Life can still be an ADVENTURE, all it takes is a “Yes” when the opportunity is given

So a huge THANK YOU to Kristin and Monica for an amazing day and an ADVENTURE I will never forget!!!!!! 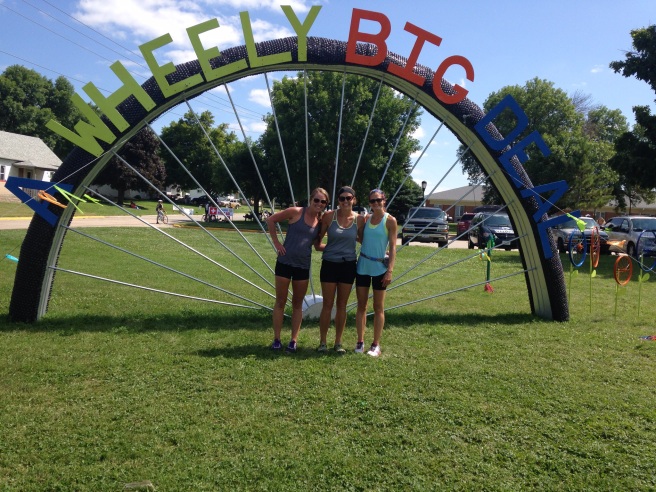